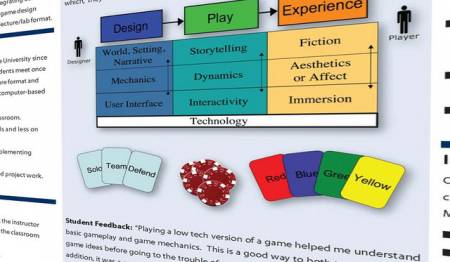 The big word is dropped. Thoughts of reflection, how to approach the creation of the world, its development in time and space, theoretical and practical aspects, everything related to the way we conceive the game. Of game players, on how to create a system that's interactive.

Gamedesign is committed to understanding and responding to players' motivations. Sometimes it is a matter of subtly guiding the behavior of players in one direction, but also of taking into account that they can play in another way then they are intended to do without others. In this sense, a good “gamedesign” makes the behaviors of cheats inoperative, because without interest and without consequences. (That said, there is no game so good that the cheaters(by profession) do not try it out). So the ideal would be to make “no room” for the “possible cheat”, or disruption of the gaming experience for at good players(and sometimes even cheaters).

The gameplay and the gamedesign are two different things. The first concerns maneuverability above all, the second concerns the gaming experience in a broader sense, how the world works in interaction with the player.

Game design is always in perpetual evolution, and here as anywhere, it is important to keep a great critical sense by reading/listening to the pros. Do not make a game by respecting letters being translated to codes, but make a game that people want to play … and especially yourself.

This is an automatic list of all items wearing the tag gamedesign .